Wyoming: the least populated state, where cattle and pronghorn outnumber people. Where two bigoted cowboys murdered Matthew Shepard in 1998 because they hated homosexuals. Except that Shepard, involved in the meth trade, was murdered by his bisexual lover and another man (hardly cowboys) who were part of the local drug culture. The media proliferated its lie so effectively that Shepard is still portrayed as a martyr. His remains are now interred in the National Cathedral in Washington. The lie persists.

On February 1, Wyoming state Senator Lynn Hutchings (R-Cheyenne) received a note asking her to leave Senate chambers to meet outside with a group of high school students from a Cheyenne high school “Gay-Straight Alliance” (GSA) club. The students intended to lobby her for HB230, a bill under consideration at the time that would expand existing protection in Wyoming employment law for age, sex, religion, and race to include two new categories, gender identity and sexual orientation.

Hutchings was not aware of the reason for the meeting. When they brought up HB 230, she observed that the bill hadn’t advanced from the House. She hadn’t studied it. She asked “what’s the bill about?” One boy said “LGBTQ+” and put his index finger in the air, a gesture meaning “anything goes.” She asked for the students’ definition of sexual orientation. One replied “any sex other than heterosexual sex.” She responded with four rhetorical questions to illustrate the elastic meaning of sexual orientation. If I wished to engage in sexual relations, she asked, with every male in the Senate chamber, is that a sexual orientation? A female student replied “that would be inappropriate”. The senator asked “what about sex with every woman?” Or with their children if parents brought them to the chamber? The same female student said “pedophilia is against the law!”

What about with their dogs? The same girl said “pedophilia and bestiality are illegal!” Hutchings asked, “But what if those behaviors were my sexual orientation?”
Worthy questions, deserving answers in any constituent discussion or legislative debate these days. California sex ed curriculum now “teaches” about pederasty as accepted in other cultures. A TED lecturer urges us “to be mature” about pedophilia, and “stop with the hate.” The campaign to normalize pedophilia is on.

Hutchings realized the conversation would take more time than she had. She exchanged friendly fist-bumps, and returned to the Senate.

On a 5-4 vote, the bill advanced from committee. But failed three days later in the general session of the House.

The same day, after two Republican cosponsors, Dan Zwonitzer and Tyler Lindholm, were laughably unable under questioning to define the term sexual orientation, the bill advanced on a 5-4 vote from committee. It failed three days later in the general session of the House.

Senator Hutchings served a term in the Wyoming House, in 2013-2014. An Air Force Veteran and devout Christian, she also happens to be black and Republican. In 2013, she spoke against a “marriage equality bill”, arguing that the same-sex marriage debate is not equivalent to the civil rights struggle for black Americans. Her speech drew outraged assaults from by the Cheyenne newspaper and a local pastor-columnist allied with Wyoming Equality (WE). The Huffington Post and other outlets blared their anger. She was inundated with repulsive emails and telephone messages, including threats. The experience was so jarring that she read some of the threats and insults into the legislative record.

This abuse earned no coverage in the Wyoming press. Instead, the story was about her “bigotry” and “intolerance.” She understands bigotry at a personal level. Her critics are the intolerant bigots.

THE SPOKE IN THE NETWORK 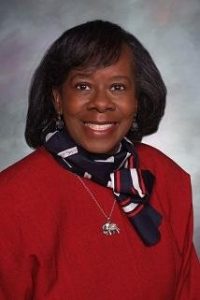 Wyoming Equality (WE) was founded in 1987 under another name. Its website features the headline “We’re Queer. And We’ve Always Been Here.” Its signature event, the Rendezvous, is a “camping trip” for “gay and lesbian Wyomingites” in the pristine Medicine Bow range near Laramie, advertised as “Wyoming’s Premiere LGBT Pride Event”. Campers can enjoy Drag Queen Bingo. One of the sponsors is Pervert Peak, whose provenance we could not determine.
In 2016, WE began sponsoring GSA clubs in Wyoming schools. Cheyenne Central High School’s GSA club sent the group to lobby Senator Hutchings.

Sara Burlingame is Executive Director of WE. For years, she aggressively lobbied for discrimination protections in law for people with non-normal sexual proclivities. In 2017, several legislators reported her for harassment inside the capitol. One filed a restraining order against her. Not content as an outsider, she ran for the Wyoming House in 2018 and was elected. A review of her campaign materials did not find prominent mention of her association with WE.

WE and its state media allies saw opportunity again in February and used their network to create a false controversy. They would make an example of Hutchings, make her feel public disdain, then watch her melt in the glare of negative publicity.

On February 6, WE filed a complaint with Senate leadership against Senator Hutchings, charging she compared homosexuality to bestiality and pedophilia.

With six days to devise their story, and help from the adults who failed in their duty to chaperone, WE ridiculously claimed that the tender-eared students were so traumatized by the encounter that they “removed themselves… to provide a supportive space for one another”. The adult chaperones, of course, did not halt the conversation or say anything at the time. And the group soon returned to lobby other legislators. The melted snowflakes recovered fast!

Ironically, WE’s complaint cites the stunningly high suicide rate of youth involved in the vivid sexual behaviors the students and WE lobby to protect. Yet we are to accept the ruse that GSA club members are too delicate to confront questions about real-life consequences of the law they want passed.

Rather than consider Hutchings’ hard questions, the GSA delegation complained. Worse, WE never offered its own legal definitions of these behaviors. They simply want protection against their notion of “discrimination”. Failing their goal, why not fabricate a story to smear a senator their lobby had previously targeted?

Predictably, the media network went into action. In “fake news” style, the media maulers never reported any side to the story other than the students’ claim. The Wyoming Democratic Party demanded Hutchings’ resignation or expulsion from the Senate.

She received dozens of vicious emails and voice messages, some timed in the middle of the night to disrupt her sleep. Examples: “I hope this ruins you.” “…you homophobic c…you f…ing n… c…go back to Africa.” “take your f…ing religion and shove it…” The media failed to report any of this.

There was also another unreported side. Senate leaders issued a calm statement. Hutchings received hundreds of supportive calls and emails. On Cheyenne’s KGAB talk radio, callers asked questions that fake news never asked. What were students doing at the legislature in the middle of the school day? Did their parents sign for travel permission? How is lobbying on this graphic topic a legitimate educational matter? Why did school administration permit it?

As of today, WE is still complaining and asking others to submit complaints. Senator Hutchings has not resigned and will not. Nor has she apologized for asking the questions which legislators, WE and the GSA students and advisors could not answer. She was supposed to crumble. She did not.

The Wyoming Senate leadership seems to understand that freedom of speech in their own legislature is at stake. So far, they have not cracked.

When our own legislators are intimidated into silence, we descend into mob tyranny. This won’t happen in Wyoming. Not yet.

Bravo, Senator Braveheart. If only there were more of you….

Dan Brophy is a Wyoming resident and has donated to Senator Hutchings’ campaigns.