I’ve been asked to write a regular column, giving the common sense cowboy slant on issues which often divide us. I welcome the opportunity to try and bring a little horse sense to our discussions. In so doing, I make a vow that I won’t attack anyone personally, primarily because they have the God-given Right to be as big an idiot as I am, or at least know facts that are different from the facts that I know. Nor will I engage in endless argument.

Years ago I learned a valuable lesson about arguing. A fellow came in to my gun shop and he started bragging about the accuracy of his deer rifle. “That rifle shoots straight as a string for 400 yards,” he claimed. Now, I knew a little bit about gravity and bullet ballistics, so I proceeded to explain the impossibility of a rifle sighted in at 100 yards being right on at 400 yards. He refused to believe it, based on his experience. The argument got a bit heated, and he left with a burr under his saddle. All this time my old mentor, Tom Ireland, had quietly watched, then sagely turned to me and advised, “Never argue with an idiot. The onlooker doesn’t know which one is the idiot.”

By way of introduction, I’m Maury Jones, “Jonesy” to my friends.  I’m a newcomer to Wyoming, having arrived here a mere 32 years ago, on December 9, 1983. My wife, Din, and I and our six children pulled up to our recently purchased home in Bedford in Star Valley. The neighbor had plowed a path to the door through three feet of snow. That winter of ‘83-84 just kept snowing. The tops of the fences disappeared and we could snowmobile across the fields without worrying about a fence post. Between snows it was bitter cold. Now THAT was a winter, not like these miserable excuses for winter that we have had lately.

When I was a kid, an old cowboy asked me, in a rather demanding tone, “Son, how old are you?” “Seven”, I apprehensively replied. He said, in an accusatory tone, “Shame on you! When I was your age, I was nine!” Ever since I’ve been confused about age. When I turned 49 my whole life passed before my eyes. It must have been the billows of smoke ascending from the inferno of candles which caused me to reflect on my lack of accomplishments over nearly five decades. Then and there I refused to turn fifty—a half-century—the following year. I deliberately decided to get younger. So my next birthday I turned 48, then 47, getting younger each year. When I get to zero I die. My son, Trenton, says he is going to take my driver’s license away when I turn fifteen.

I was born and raised in Arizona. One sweltering July day when the temperature topped 118, my mind was hallucinating from the heat and I swear I saw the Devil and heard him say, “I’ll be damned if this don’t beat Hell.” I immediately made plans to flee to Wyoming. 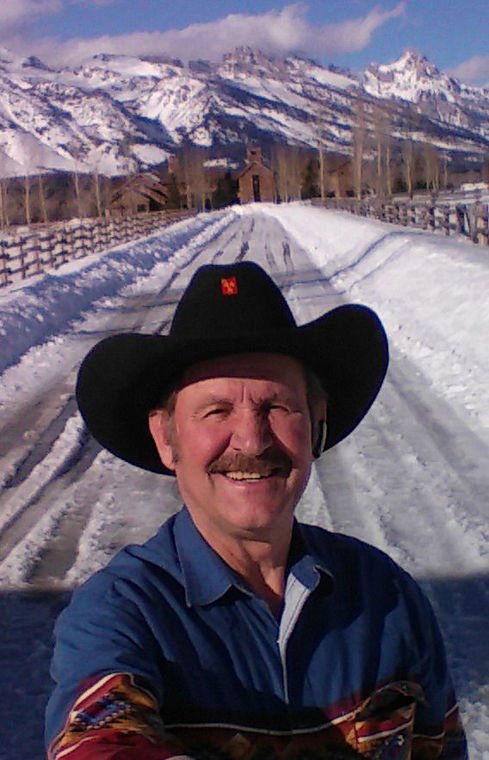 This column will reflect my experiences in life, which are varied, including gunsmith, river guide, businessman, a published writer, owned a melodrama theater (I wrote the plays and acted out my natural tendency as the villain), an outfitter, union carpenter, farmer, rancher, choir director, cowboy poet, owner of a kid’s summer camp, was a hod carrier (look it up), and I was also a professional feces counter while working for the Arizona Game and Fish. Yes, I counted deer, elk, and turkey poop.

Now, I’m called a cowboy by most who see me. Probably the hat, buckle, and boots. And the mustache. Ah, the mustache. I was once walking down the boardwalk in the Town Square in Jackson, dragging a chain. This tourist stopped me and asked, “Why are you dragging that chain?” I explained, “Did you ever try to push one?” He took a step back as if I was riding with only one foot in the stirrup. Then his snot-nosed kid asked, “Daddy, is that a real cowboy?” His dad took one look at me and sniffed, “No. A real cowboy has a mustache.” That was the day my razor retired from upper-lip duty.

Note: I’m not really a “cowpuncher”.  I’ve punched a few horses who misbehaved and the results were less than satisfactory. I punched my sister when I was 10 and broke my hand.  I hit her in the hip, as high as I could reach.  I punched my cousin’s fist when I was 14 and broke the same hand.  Two fools swinging at the same time with the same aim.  So I don’t punch anything anymore. I’ve worked on several farms and ranches, but technically, I’m not a “cow”boy.

I’m a “horse”boy, and proud of it.  I’ve owned and worked with horses and people in a tourist service setting all my life since I was age 13. But you can go ahead and call me a “cowboy”. Calling me a “horseboy” would be commentary on my looks.

So, folks, join me for a great adventure in trying to apply some Cowboy Common Sense to the mess this old world is in. We will have fun.

And remember; “Life is always better when viewed from between the ears of a horse.”