The Disputation on the Hypocrisy and  Unprofessionalism of Wyoming Legislators and the Wyoming and County Republican Parties.

For social media debate on October 31st, 2021 for as long as so needed to correct this atrocious behavior.

Out of love and zeal for truth and the desire to bring it to light, the following 21 theses will be publicly discussed on social media. For those who are not on social media please disseminate via e-mail and/or other mediums.

Items 1-10 address the hypocrisy and unprofessionalism concerning the conduct of legislators. Items 11-20 address the hypocrisy of the legislature regarding the special session, and the reason that it had to be called. Item 21 will be a summary of all of these things. Sources will be cited following item 21.

1. When a precinct Committeeman, Troy Bray1, wrote a deserved, yet highly impassioned, email to Senator Tara Nethercott, (for her role in killing the bill that would have protected Wyoming citizens from Biden’s vaccine mandate), and said things that were very inappropriate along with what needed to be said, members of the legislature, members of County and State Republican Parties, the main stream media and alternative “conservative” media, and members of the public called for his resignation.

2. When the Vice President of the Senate, -and author of the amendment that killed the Second Amendment Preservation Act-, Larry Hicks, sent a hate-filled response to Steve Bray after Steve emailed him about special session2, and when, nearly one week later, Senator Hicks sent an apology3, not for what he said, but for saying it to the wrong person… Nothing was said.

No cry from the legislature, crickets from all County and the State Republican Parties, nothing from the media, and nothing from alternative “conservative” media.

3. Yet when the former Speaker of the House, Rep. Steve Harshman drops an F bomb and says derogatory things about another legislator on the (virtual) House Floor4, legislators, county Republican leaders, media and alternative “conservative” media, and members of the public rightfully spoke out, and Rep. Harshman had virtual privileges revoked.

4. Further, Rep. Landon Brown wore a costume on the House Floor on Oct. 29th, 20215, making a mockery of our Legislative branch of government. He was rightfully called out, by members of the public, including some leaders within the Republican Party -albeit as themselves not on behalf of their parties-.

6. Given the above information, let it be known that those who called out a Republican Precinct Committee man, Troy Bray, including County and State Republican leaders and the parties they govern, the mainstream media and alternative “conservative” media, and called for his resignation as committeeman, were SILENT when the Vice President of the Senate, sent an equally hateful email to a Wyoming Citizen.

7. Let it be known that more attention was given to the inappropriate attire worn by Rep. Landon Brown, than was given to the Vice President of the Senate, Larry Hicks, sending hate mail to a Wyoming Citizen. The attention to the matter was deserved, however inappropriately Rep. Brown was dressed, the matter was not more egregious than the hate mail sent by Vice President Hicks.

8. Let it be known that more attention was given to a hot mic F bomb and derogatory remarks on the House Floor by former Speaker of the House, Rep. Steve Harshman (attention to the matter was much deserved) than hate mail, and a lacking in sincerity apology from Vice President Hicks.

9. Let it be known that if Vice President of the Senate, Larry Hicks had been a conservative, he would have been disciplined by legislative leadership, he would have been exposed by the media, even alternative media, and the County and State Republican Parties would have weighed in.

10. What Vice President of the Senate Larry Hicks did to the Second Amendment Preservation Act (SAPA)7 should have caused him to be censured at the very least by the county Republican Parties in his district, he was not. There is now a very hypocritical trend that involves Vice President of the Senate Larry Hicks not being held accountable for his actions. Those refusing to hold him accountable, are enabling him to continue his bad behavior.

11. When Senator Bouchard brought a bill prohibiting coerced vaccinations during the 2020 legislative session8, Chairman of the Judiciary Committee, Sen. Tara Nethercott, failed to let Senator Bouchard, (who was in another committee meeting next door), know that she moved his bill up on the schedule so that he could not present his bill and answer any questions about it, -even after giving Senator Kinskey multiple opportunities to present his bills-.9

12. Senator Kost spoke against the bill prohibiting coerced vaccinations because “we’re making some kind of a statute for one particular circumstance that at this point I would say they’re not going to force us to take that, you still have the right not to take those shots.” 9

13. Senator Kolb spoke against the bill and said, “I’m 99% sure that it would be illegal to require vaccination [for] residents or patients.”9

14. Chairman Nethercott spoke against the bill and said, “No patient, no United States citizen can be forced to take a vaccination of any kind whether it’s COVID or otherwise, but no patients are required to be vaccinated.” before calling for the roll call vote, which consisted of 4 NOES and 1 Aye, the single Aye vote coming from the lone Conservative on the committee, and co-sponsor of SF 94 -Prohibiting coerced vaccinations, Sen. Tim French.9

15. On September 9th, 2021, President Joe Biden issued a vaccine mandate for the US Department of Labor to implement.10 Under the guise of protecting Wyoming citizens from this mandate a special session was called. A special session that would not have had to been called, had SF 94 -Prohibiting Coerced Vaccinations not been killed by Sen. Nethercott, Sen. Kolb, Senator Kost, and Sen. Cooper in Committee.

17. Every bill that would have addressed the issue in such a way that the rights of employers, employees, students, and patients in the State of Wyoming were protected, was killed on introduction. Weaker, feel-good bills were introduced and amended to be not only useless but opened the door for more infringements on the rights of the Wyoming people.12

18. Sen. Tara Nethercott, stated in committee that: “No patient, no United States citizen can be forced to take a vaccination of any kind whether it’s COVID or otherwise, but no patients are required to be vaccinated.”9, however just days before the start of the legislative session Rep. Bill Fortner was forced to be vaccinated in order to receive an operation that he needed.

19. Sen. Tara Nethercott lacked common sense foresight, and killed SF 94 because of her condescending arrogance, and left most Wyomingites completely vulnerable, and now facing the choice between keeping their jobs and having autonomy over their own bodies.

20. Taxpayer dollars have been wasted on a special session, that has so far passed two weak and pathetic, heavily, and dangerously amended House Bills pertaining to vaccinations, a Senate File regarding the gaming commission. This special session called due to the arrogance and negligence of Sen. Tara Nethercott, was an absolute farce, and the Wyoming people will pay the price.

21. For killing legislation that would have prevented the need to waste taxpayer money on a farce of a special session, Tara Nethercott deserved to be called out by Troy Bray, though his approach was not entirely appropriate. Sen. Nethercott should also be held accountable for being the sole reason that the special session was necessary.

Troy Bray is not a legislator, he is a Republican precinct committeeman, and for some reason was held to a much higher standard than the legislators mentioned above. Troy Bray went to his constituents, in the precinct that he represents, regarding the email that he sent and asked if they wanted him to step down. Because Troy had made a sincere effort and apologized to Sen. Nethercott, they did not ask him to resign his position.

Rep. Steve Harshman deserved to be called out, and deserved discipline, there has been talk of censorship of Rep Harshman, but no talk of censorship, of Vice President of the Senate (and reason that Wyoming does not have a SAPA law that would protect Wyomingites from unconstitutional federal gun control laws), Larry Hicks, not for what he did to the SAPA bill, nor for the hate mail that he sent to Steve Bray from his legislative e-mail.

Rep. Landon Brown deserved to be called out for his inappropriate attire that he wore on the House Floor, however inappropriate, this was not deserving of attention more than Vice President Hicks’ reprehensible email, and atrociously insulting apology. 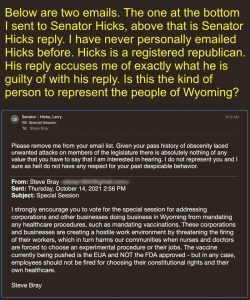 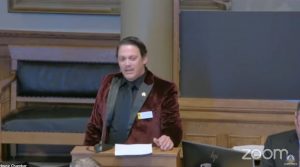 9. Video of Judiciary Committee Meeting where SF 94 was killed: https://www.youtube.com/watch?v=E1ego8Nwg_U&t=128s

12. Bills that passed the House during the first week of Special Session:

Editor’s Note: Troy Bray and Steve Bray are not related.